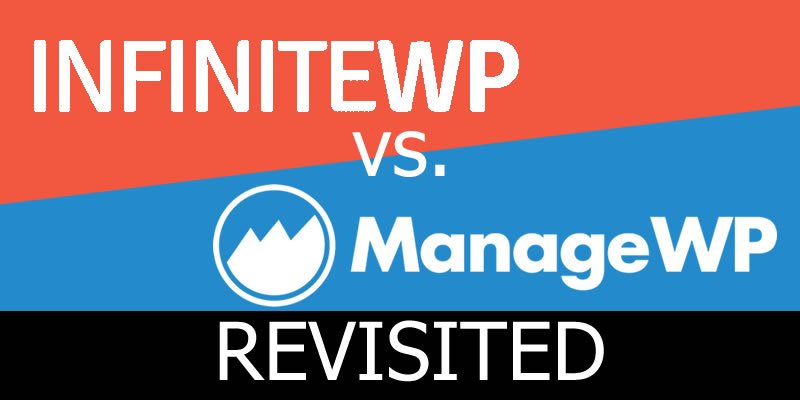 This is a follow-up to an old post I wrote in 2013 entitled “Why I’ve switched (mostly) from ManageWP to InfiniteWP” in which I compared the relative merits of Manage WP and Infinite WP.  In that article I concluded that although Manage WP was better in many ways, I mostly used Inifinite WP due to the more lenient pricing model for mutltiple sites.  I also got a very detailed and polite comment on my post from James Mowery the CEO of Manage WP, who detailed the reasoning for their pricing model

The reasoning was that at the time the pricing models for the two services were very different.

For me at the time the InfiniteWP option made more sense and that became my WordPress maintenance software of choice.

Some time after that I started using a second installation of InfiniteWP for another group of websites. However after a while I encountered problems with the system.  Certain sites would not sync with the installation and I couldn’t be sure I was seeing accurate data in my InfiniteWP dashboard.  After many attempts to sort it out and contact with InfiniteWP’s support I chose to take another look at different options and see if there was something else I could use instead.

I thoroughly investigated MainWP, and indeed implemented and used it for a several months. It was OK.  It did the job much like others but it never really inspired confidence.  The pricing model was similar to Infinite WP’s  with unlimited sites, limited functionality, but paid for options for additional functionality.

I also used Jetpack to monitor themes and plugins but never really got on with the interface.

Around the same time ManageWP started advertising their “coming soon” roll-out of a new platform called Orion.  They detailed the pricing model for Orion in a number of blog posts (e.g. ManageWP Orion Bundles) prior to launch and it looked good so I decided to give them another go.

The pricing model has been switched to something much closer to Infinite WP’s, with most functionality available for free for unlimited sites.  But on top of this, the pricing model means that you only pay for what you use.  The free version gives you weekly backups of your sites which is nice.  If you want to add daily backups then you only pay $2/month.  Other services are similarly low in price.

The Orion interface is, to me, the best of all the admin areas for this type of tool.  It’s intuitive, easy to use and you can get to pretty much anywhere you need to within 2-3 clicks.

I’ve only had one real problem with Orion.  At one point it failed to connect to most of my sites.  After several support emails to both Manage WP and the host (Siteground) it was determined that there was something blocking the ManageWP IP addresses on the Siteground server.

Presumably this is to do with having multiple sites on the same server, all being accessed regularly by the ManageWP’s singel IP address.  I guess it looks like nefarious activity to Siteground’s automatic security measures balcklisted the IP.  It was eventually sorted out once the problem was identified.

Intriguingly I now suspect the same thing may have been what caused the problems I had with Infinite WP and put me back on the route back to Manage WP.  However Infinite WP’s support didn’t help me to reach the solution, whereas Manage WP’s did.

I’m now a fully signed up and happy user of Manage WP Orion. It’s a great piece of software with pricing options to suit everyone.

I’d like to think my original article played a small part in spurring Manage WP on to find a pricing model that works for all.